This is an article from the Law Office of Russell M. Blood (https://www.russbloodlaw.com) in South Jordan, Utah, that we thought others may find helpful.

In a study conducted by caring.com in 2015, only 56% of American households had a will or a living trust. While most of us understand the importance of having a will in place, especially in seeing to the needs of a young family, there is still an unexplained resistance to attending to legal matters to assure that family affairs are in order. The consequences of failing to prepare can be devastating! In a nation of do-it-yourselfers, the legal community has created online templates for basic wills. While there is nothing wrong with trying to save a few bucks, you could end up costing yourself more in the long run if you fail to consider the following suggestions:

1. HIRE AN EXPERT TO HELP  Mistakes on DIY wills and trusts are commonly caused by a misunderstanding of legal terminology and technical aspects of creating these documents. One 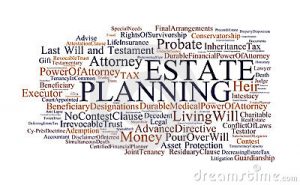 devastating mistake accidentally resulted from an individual’s confusion about the meaning of the term “beneficiary.” Leanna Hammill, an attorney in Hingham, Massachusetts, wrote in an article published by AARP, (“4 Costly Estate-Planning Blunders,” March 2011; www.arp.org), that an incorrect use of this term resulted in the immediate transfer of all her client’s property to his children. He was required, by law, to pay them an annual income, while nothing was left for his wife. This was not his intent, but he thought he could create his own will after reading a book. An experienced estate planning attorney would have helped the client avoid this unintended result.

2. TIE YOUR BUSINESS INTO YOUR ESTATE PLAN  If you own your own business, you may be confused about how to provide equally for children who do and do not work in the business. It is unlikely that a simple will would adequately address your children’s different interests in a way that would help the business be successful after you are gone. Often parents do not want to involve their adult children in their money matters, but if your children are your business partners, it is only fair that they understand the plan for your business interests after you pass away.

Steve Ciepiela, a financial planner in Albuquerque, N.M, wrote of a couple that had five children, but failed to create an adequate estate plan.  Both parents died within a couple months of each other, leaving behind only a simple will. “Parents sometimes don’t want to talk to their kids about [money] and just leave the business to the kids,” says Ciepiela, President and owner of Charles Stephen & Co. “That’s a huge mistake.” In this case, the parents believed their business assets would be protected by the will, but by failing to create an estate plan, they failed to provide protection for their two sons who ran the business or to provide any financial benefits to their other three children. At a family meeting following their parents’ deaths, the three children who were not involved in the business immediately wanted to know how much income they would receive from the business. Unfortunately, the two sons were forced to close their business and sell the company at a significant loss in order to pay their parents’ estate taxes and be able to divide the assets between all the children. (See AARP: “4 Costly Estate-Planning Blunders;” op cit.)

3. WHY LEAVING A LUMP SUM TO YOUR BENEFICIARY MAY NOT BE A GOOD IDEA  If you are leaving money behind, you want to make sure that it makes a difference in the lives of your family members. A trust, rather than cash, can better provide for your children over the long term. An example of why a trust is better than a will is shared by Donald A. DeLong, an estate, business and tax-planning attorney in Southfield, Michigan. He witnessed a situation in which a father left his heroin-addicted son $250,000 in cash upon his death. Six months later, his son was penniless. “He did his own will,” says DeLong. “He knew the problems his son had with drugs because his son lived with him. I think he just wasn’t aware he had other options.”

In this instance, had the client met with an attorney and explained his intentions, it is highly likely that he would have been encouraged to set up a trust for his son. “A trust agreement stipulates how you want [your] property distributed. So rather than giving property outright to a beneficiary, the trustee holds your property and doles it out per your instructions.” In the case of the addicted son, a trust would have been an added layer of protection in looking after his son’s best interests by providing for him in a way that better suited his lifestyle and needs, and would have protected the money for his long-term benefit. (See: AARP: “4 Costly Estate-Planning Blunders;” op cit.)

4. DON’T FORGET TO UPDATE YOUR PLAN  Families change… and so does the law. The will or trust you set up twenty years ago may still be legal, but probably won’t still be relevant to your growing family. For instance, you may have included provisions for youngsters that are all grown up now. You may need to include grandchildren in your plan. Or perhaps divorce and remarriage has caused you to reflect on whether your own family’s needs will still be taken care of instead of seeing your assets split between step-children. Examining your present needs frequently and comparing those needs to what your legal documents provide is a good method for deciding how to keep your estate plan updated. These changes can easily be made by your estate planning attorney.

Most importantly, neglecting to prepare and keep your plan up to date can leave a mess for your beneficiaries. Messes of this nature can be rather pricey and will most likely end up in probate. If you haven’t prepared an estate plan by the time you die, the state will decided what happens to your estate.