This is an article from The Law Firm of Evan H. Farr, P.C. (https://goo.gl/p0E9xO) in Fairfax, Virginia, that we thought others may find helpful. 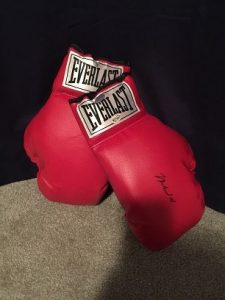 For more than 20 years, Rachel’s father has had Parkinson’s Disease. When she first moved to the DC area in 1998, her father walked with a cane, and although his hands shook a little, he was still able to dance with her at her wedding. Rachel knew that this was only the beginning, and as she researched the debilitating disease, she realized the worst was yet to come.

As Rachel’s father’s mobility got worse, he became confined to a wheelchair. He underwent the deep brain stimulation pacemaker surgery, and in combination with his meds, it helped a lot. He no longer shook like he used to, but his speech was still severely slurred, and he had trouble swallowing. Through it all, he kept a positive attitude and his love for his children and grandchildren is what keeps him going. For motivation, he also keeps his prized possession on display. It is an autographed pair of boxing gloves from Muhammad Ali, his hero and a fighter who also battled with Parkinson’s.

Rachel and her father’s hearts sunk when they heard the news earlier this month that Muhammad Ali had died after a 30+ year struggle with Parkinson’s. Ali was given the diagnosis in 1984 when he was just 42. The world witnessed his gradual decline over the decades as tremors and stiffness set in, replacing his athletic stride with a shuffle, silencing his exuberant voice, and freezing his face, so it appeared expressionless.

Similar to Michael J. Fox, Muhammad Ali was on a mission to fight Parkinson’s by raising money for research and spreading awareness. His determination led to the creation of the Muhammad Ali Parkinson Center at Barrow Neurological Institute in Phoenix. “Muhammad felt he had a mission,” said Dr. Abraham Lieberman, Ali’s personal physician and chair of Movement Disorders Research at Barrow. “Muhammad rose from a young boy in Louisville to the heavyweight champion of the world. This center was part of it. This was his mission.”

When Ali was first diagnosed with Parkinson’s in the 1980’s, he resisted numerous attempts to lend his name to campaigns to battle the disease. But that changed after Ali met Dr. Lieberman, who wrote a poem that persuaded the Champ to join with Lieberman and Phoenix philanthropist, Jimmy Walker, to establish the Muhammad Ali Parkinson Center in 1997.

“He took terrific pride in the Center,” Dr. Lieberman said. “His eyes would light up when he came here.”

A press conference last week was held in an exercise room at the center used every day by hundreds of patients stricken with the same disease as Ali. They receive the same care that “The Greatest” did.  “The care has been afforded not just to the Greatest, but the least,” said Brian Mortenson, president and CEO of St. Joseph’s Foundation and Barrow Neurological Foundation. “That was part of the vision of the Alis.”

“One of the beautiful things about Ali was that it made no difference what status in life you had,” Dr. Spetzler said. “He may no longer be physically with us, but his indomitable spirit of confronting bigotry and fighting the ravages of the disease will prevail.”

“Muhammad stood up to this disease for 34 years,” said Dr. Lieberman, who last saw Ali on the day he died. “The last few years were really tough.”

Caring for Loved Ones with Parkinson’s: Tips from Lonnie Ali

In many ways, minus the Ali family’s fame and financial wherewithal, the Ali’s faced what millions of caregivers endure every day in America: the guilt and loneliness, joy and exasperation, frustration and anxiety, and the challenge of learning how to accept what Lonnie calls a “new normal.”

Lonnie Ali used several coping mechanisms in her role as caregiver, as follows:

The beauty of Muhammad was that “he made this illness, as horrible as it was, as much as it took away from him, serve him in some way,” Lonnie says. “If there was ever anyone who always landed on his feet, and come out smelling like a rose, it was Muhammad. It was his remarkable attitude toward life. He never has let anything stand in his way.”

A diagnosis of Parkinson’s disease means adjusting to decreased mobility and other burdens of the disease. To alleviate problems later, it is also important to plan now for the worst to ensure your wishes are carried out and your family protected.

The first and most essential legal document is a Power of Attorney.  As you can see from the Ali’s situation, Parkinson’s disease can be very disruptive, and there may come a time with the illness that you would prefer others make choices for you. Many married couples assume that they are allowed to make legally binding decisions on behalf of their spouses. Unfortunately, this is not the case unless you sign a Power of Attorney.

Part of planning is to ensure that you or your loved one gets the best possible care and maintains the highest possible quality of life, whether at home, in an assisted living facility, or in a nursing home. Life Care Planning and Medicaid Asset Protection can be started any time after a person enters the “long-term care continuum,” meaning that a person is starting to need assistance with Activities of Daily Living (eating, dressing, bathing, toileting, transferring, and walking) or Instrumental Activities of Daily Living (such as cooking, cleaning, caring for pets, paying bills and managing finances). This type of planning can be started while you are still able to make legal and financial decisions, or can be initiated by an adult child acting as agent under a properly-drafted Power of Attorney, even if you are already in a nursing home or receiving other long-term care assistance.  In fact, the majority of our Life Care Planning and Medicaid Asset Protection clients come to us when nursing home care is already in place or is imminent.  Read more about Life Care Planning and Medicaid Asset Protection.