This is an article by Neil Goldstein (https://goo.gl/I56nwv) in New York City, New York, that we thought others may find helpful.

My wife and I have been partners in everything for 48 years, but there’s nothing remotely romantic about full-time care-taking. 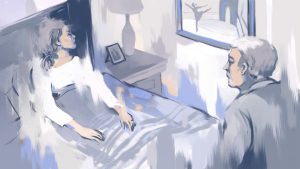 It’s late night, early morning. Barbara wakes up and looks straight at me with half-open, sad eyes. She is panic-stricken, terrified, with rapid breathing that would scare the hell out of anyone sleeping next to her.

“I, I, I, can’t, can’t, can’t,” she says. Her hair is in a ponytail, coming undone. She’s wearing a black sweatshirt with a ballerina on it, a holdover from her decades as a dancer.

Of course she can. She’s my wife of 48 years. For the past two years, she’s had Alzheimer’s, and I’ve been her caretaker. I don’t like the word caretaker, though. This is my wife who I sleep next to, not a parent with dementia. This is the woman I’ve loved for fifty years, the girl I met when we were sophomores together at James Monroe High School in the Bronx. We founded a dance school together, raised a daughter together. I am her husband.

For years, before bed Barbara would bathe in our jacuzzi and watch ballets for hours on the VCR. She especially loved the Tchaikovsky ballets, many of which she would recreate for our dance school. She would get so absorbed watching her videos, I would often have to go get her out of the tub. Sleeping now next to this scared, tormented and resigned woman, I can’t help but compare these nights to all the nights and mornings we woke up together, before it was like this, when she was a woman I could touch in the dark, no matter what happened during the day, the week, the month, the year. Now I’m her caretaker.

Alzheimer’s disease is every day, every night. No cheating the disease out of a single second. I am one-hundred percent responsible for Barbara’s life, her well-being, her comfort, her protection.

To protect Barbara, I’ve had to take so much away from her. I’ve taken away her ballet teaching, her life’s work. I have taken away her car, her driving, her responsibilities, her decision making, and her independence. For her well-being and mine, I’ve hired two home-healthcare aides.

“I don’t like people when they come to my house and tell me what to do,” Barbara says, complaining to me about the aides, Ninda and Sharon. “I don’t like it. It’s my house. I don’t have to be told to take a bath and change my clothes. I know how to clean myself and what to wear. They go downstairs and just throw everything in the washing machine, like it’s not my house. I don’t even know them. How could they act like that? It’s my house.”

I hired them a year and a half ago and pay them out of pocket. They work three days each, seven hours a day, 42 hours a week total. The other 126 hours of the week I’m on call. Throw in the holidays and the days off for the aides too.

To get insurance for Barbara’s Alzheimer’s disease, I had to establish a trust with our assets. Then, after five years if I have to put Barbara in a nursing home that costs in the range of fifteen thousand dollars a month, Medicaid will cover it.

If the worst happens and my wife must be placed in a nursing home before the requisite five years, it could cost everything we have, leaving us with empty pockets. It’s an insane system that cannot help a person who is losing her mind, cannot stop a family from going broke for her care.

“I thought you were never coming home. Where were you? I called the studio and no one answered,” Barbara says. This is the “Hello” I get the second I unlock the door and am home.

The writing class I’m taking ends at five p.m. I get on a rush-hour number 2 train to the Bronx. Then at the Pelham Parkway station, I take a cab to Westervelt Avenue and arrive home by 6:30 p.m.

I never stay downtown to browse, take in the wondrous life of the city, or shop. I just go straight home to relieve Ninda or Sharon and walk into the usual, “where were you?” greeting. Six hours have passed since I left Barbara. I hate coming home.

At this point, I become the caretaker until eleven a.m. the next day. I must hide my excitement from my day in class and can’t share what I’m writing with her. Any act of enjoyment or connectedness on my part to being alive, Barbara takes as separation from her and she resents me for it. In her despair, we can only be equals again if I am diminished too. And I do feel increasingly separate from her with each passing day, as the white lies I tell her become normal. Though the gravitational pull of a lifetime together is a mighty force.

Barbara would rather I never leave the house or, when I do, take her with me. My overwhelming fear is my soul will be accreted into Barbara’s malfunctioning synapses and I will lose my will to live. Alzheimer’s leaves no prisoners.

It is my fault she has Alzheimer’s. “You took me to the doctors and made me take humiliating tests to prove I am crazy,” she says. “So you can put me in a home and do whatever you want.”

Barbara doesn’t like when I joke or talk with her aides. “You are just trying to make them happy,” she says, “be the big man, but I’m in my own house and they’re telling me what to do. I’m not a child. You have done this to me.”

I say, “Would you like to stay by yourself, then?”

“I’m starving, do we have any dinner?” she asks me.

I sit on the couch and in five minutes Barbara asks me when we are going to eat and if we have any dinner.

I say, “I’m going to go downstairs, take a shower, then come up to make dinner.”

I hurry. I am back upstairs in the kitchen that I designed just two years ago. It’s my space and my place of letting my imagination conjure up a dinner. I usually keep Barbara, or anyone, out of the kitchen, so I can freely associate with the food. It is the only pleasure I have in my home.

Barbara sees me in the kitchen, comes in and finds things to do. She washes a glass that takes forever. I do not like her in the kitchen. Barbara is interrupting the release of my endorphins as I create the meal. She knows this. I either politely tell Barbara to leave or I say that in other words.

She leaves, but soon after, she’s back in my kitchen.

“Barbara, I’m just figuring out the menu. We’re not close to dinner,” I tell her.

There’s no sense in getting angry. She doesn’t remember being in the kitchen a few minutes ago.

“Shall I use the big plates and do we need sharp knives?” she asks.

“I’ll let you know soon, Barbara,” I say. If she sets the table now, she’ll sit at the table until dinner is ready and query me repeatedly about when the food will be served – a good hour away.

I’ve kept her at bay for now. Barbara sits on the couch wth her head sideways, resting on a couch pillow. Her feet are on the couch. She covers herself with a light Degas blanket. We’re listening to Pandora, to Etta James singing “A Sunday Kind of Love.”

I’ve known this song since I was a teenager. At the 92nd Street Y, in the late 1950s, Barbara and I would slow dance to this tune. It was one of our favorites, sung by the Harptones.

I sing along while I make a rack of lamb with turmeric seared on the stove and then broiled in the oven to medium rare. I cut a cucumber with a peeler, super thin, add sweet pickle juice and dill.

“I’m hoping to discover a certain kind of lover who will show me the way,” Etta sings.

I stew little potatoes in chicken broth and butter. I slice up a grapefruit, removing all the skin and pulp, leaving just the meat of the grapefruit. I add honey, cinnamon and fresh cilantro. Barbara sets the table. “Shall I get the big plates?” she asks again.

Dinner goes well. Barbara and I enjoy the meal with a Malbec. Barbara asks me, “Who are you talking to?” Unaware, I am gesturing with my right hand. I do this often at the dinner table. Sometimes, I tell Barbara I am living in a parallel universe, having dinner with a table-full of people at the same time.

By 8:30 she’s ready for bed. Barbara will plead with me to come downstairs and go to bed with her. I usually fight with her over this. I’m not ready to call it a night. I want to stay up and watch a movie, let my imagination run around my brain, jot down a revelation that may occur. This dispute never ends well. Barbara becomes agitated and I will be in a quagmire of pleads, obstinance, anger, fixation and violence. 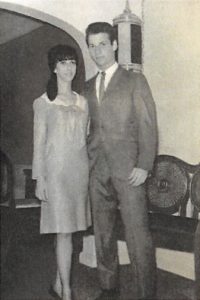 Although I resent giving in, I have learned to go to bed with her. I just read or write in bed. I give Barbara her night pill which serves to calm her and help her sleep. I can’t get out of bed and go upstairs for a little “me time.” If she awakes and I am not in bed with her, she panics, even if she comes upstairs and finds me. It takes me a while to assure her I have not left her.

When I ask the psychiatrist, the neurologist, the therapist, “What is going to happen to Barbara next?” The collective response is, “Barbara has to be managed.” I have learned this answer is more designed for me than for Barbara – to make me believe I am in charge and have control: managing my belief that I can take care of Barbara, since she cannot take care of herself. Managing to remain a whole person; conscious, vital, alive, with no side effects. Managing the look on her face when the day comes to put her into a nursing home, and managing the guilt.

Will I ever again experience the simple pleasures of time out from the rigors of life, a day off, a vacation? Will I have a love to have and to hold, a Sunday kind of love?

Neil Goldstein is a native Bronxite with a degree in History from New York University. He and his wife Barbara are the co-founders of the Bronx Dance Theatre, established in 1976. He remains its Executive Director.

Nicole Xu is a freelance illustrator who grew up in Vancouver, Canada and is currently fniishing up her studies at the Rhode Island School of Design. See more of her work on instagram @nicolexu_.