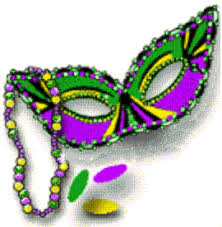 The Annual Mardi Gras Celebration is coming to town.  The celebration will start at the annual Fat Saturday Parade of Fools in downtown Fayetteville with costumes, floats and lots and lots of beads.  Bring the whole family to this event on Saturday, March 1, 2014, at 2:00pm.  The parade begins on the Fayetteville Square and proceeds North on Block Street and then East on Dickson Street ending at West Street.  Dress up and join the fun that has become a 20 year tradition in Fayetteville.  Then join members of the Fayetteville Krewes on Fat Tuesday to celebrate Mardi Gras with festivities begining around 7:00pm.  The Demented Krewe of Dickson will crown their royalty around 8:00pm.  Then parade with the Billy Zydeco Band through the sponsoring clubs on Dickson Street.  Participation in the parade on Fat Tuesday, March 4th is open to all adults.